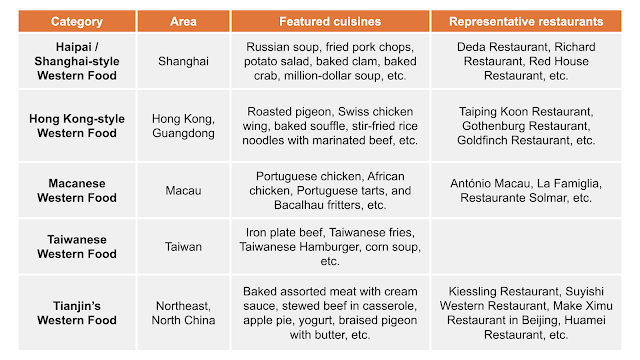 Shanghai, a city known for its busiest port in the world, gathers cuisines worldwide. Many famous Western delicacies such as ice cream, salad, and sirloin steak first arrived in Shanghai before becoming widespread in China.

The localization of Western food in Shanghai is based on the Shanghainese taste preferences and local ingredients available. This fusion is known as the Haipai cuisine or Shanghai-style Western food. The Haipai cuisine draws inspiration from English, French, German, Italian, American and Russian food. However, the classification of this cuisine is not strictly based on its origin. Instead, the classification is based on the local impression of Western food customs.

As Zhao Heng’s article "The Evolution of Chinese-style Western Food" rightly pointed out: "The British love chips and fried fish, so all fried food dipped in bread bran are associated with the British cuisine. The French love all kinds of sauces, so the Chinese invent their own 'French sauce' made of ketchup, carrots, mushrooms, peas, and raisins. When you pour this sauce on a fried pork chop, fried fish, or meat pie, you can call it 'French XX'."

Russian soup, fried pork chop and potato salad are representative of the Haipai cuisine. These improved western dishes are now seen as part of the daily food choices of a Shanghainese.

Russian Soup in China originates from borscht, a famous Russian cuisine with thick beef soup mixed with a variety of vegetables. Among all ingredients, beetroot is essential to ensure the soup's consistency, sweetness, and colour. However, as Shanghai has no beetroot, many use cabbage as a substitute. The redness of the soup comes from fresh tomatoes or ketchup instead. If there is no beef, Shanghainese will put diced red sausage instead. With such variations, it is hard for a Russian to recognize borscht’s Chinese counterpart.

In the 1950s, salad dressings were very rare in Shanghai. Therefore, Shanghainese use egg yolks for salad dressings instead. They mix cooked potatoes with diced red sausage and green beans. Afterwards, they add in their local version of handmade mayonnaise. This is known as the Chinese-style "potato salad".

With the return of authentic Western food in China, Haipai cuisine is now on the wane. Currently, only a few restaurants, including Deda Restaurant, Richard Restaurant, and Red House Restaurant in Shanghai, continue to serve Haipai cuisine.

The Hong Kong-style Western food usually starts with soup and butter bread, without any appetizers. Typically, the soups served are either borscht soup or cream soup. The Hong Kong-style borscht, known as "red soup”, is made with ketchup as beetroot is not widely available. As for the cream soup, the Hongkongers prefer a less watery variant called "white soup".

The main dishes in Hong Kong include pork, beef, chicken and Basa fillet. Roasted pigeon, Swiss chicken wings and other unique local substitutes are also available. To improve the taste of the steaks, Chinese soy sauce is added, and the dish is served on an iron plate. The Swiss chicken wing in Hong Kong is not from Switzerland, but the word "sweet" is often misheard as "Swiss", and so the shrewd restaurant owner changed the name to “upgrade” the dish. Besides the mains, Cantonese Western restaurants also serve rice, pasta, chips, and salad for a more filling meal.

The desserts served in Hong Kong Western restaurants also caters to the local. Classic drinks and desserts such as milk tea, lemon tea, dragon and phoenix cola (iced cola added with fresh lemon and pickled lemon), and red bean slush are widely available. The most famous dessert will be their "baked souffle". This is the world's largest souffle needing up to seven eggs. As the souffle can only be freshly prepared as ordered, customers must generally wait for two hours to get it.

Hundreds of years ago, the Portuguese started their journey around the world, bringing local ingredients such as laurel, olive oil, sausages, and wine. When they arrived in India, they found curry. In Southeast Asia, they discovered spices like cinnamon, cardamom, pepper, and cloves. Afterwards, the Portuguese chose to settle down in Macau. This was when they combined all the flavours – both local and aboard, with Macau food, giving rise to the Western version of Macanese cuisine.

As a multicultural fusion, Macanese cuisine is known for its excellent usage of spices and sauces. From Indian turmeric, cumin, and cinnamon to olive oil, bay leaves and basil used in Mediterranean cooking and Portuguese dishes, many spices and sauces are integrated into the Macanese Western cuisine. Local ingredients are combined with Western flavours. For example, the hot and sour fish, Bacalhau fritters, and samosa are filled with Indian flavours.

Portuguese chicken, despite its name, is a dish adapted from India and Africa.  The process is simple: whole chicken, potatoes, onions, and eggs are mixed with curry. After being stir-fried and roasted, the fragrant and tender Portuguese chicken is ready for consumption.

African chicken is named as such because a spicy sauce from Africa is required in the recipe. This cuisine is made of chicken, potatoes and shredded coconut. After marinating for a day, the chicken will fully absorb the essence of different spices. Afterwards, it is baked and wrapped with coconut shreds, which is ideal for Macanese palates.

Originating from Portugal, Portuguese tarts flourished in Macau. In 1989, a British chef named Andrew Stow changed Pastéis de Belém, a Portuguese egg custard dessert. With British custard filling and sugar reduction, he created the Portuguese tart, which has become one of Macau's famous cuisine of all time.

When we think about Macanese food, Bacalhau fritters will come to mind. This salted cod is also one of the most traditional Portuguese cuisines.

Today, restaurants like António Macau, La Famiglia and Restaurante Solmar continue to serve Macanese Western cuisine. The Macau Special Administrative Region (SAR) government has continuously strived to protect the food heritage in Macau. In 2012, the Cultural Bureau of the Macau SAR government listed the culinary skills of the Macanese cuisine on the intangible cultural heritage list.

Like Haipai and Cantonese cuisines, Taiwanese Western food is also transformed by innovative chefs to satisfy the tastebuds of local diners. For example, hamburgers in Taiwan are filled with fried eggs and mayonnaise instead of meat.

Western corn soup usually has all its ingredients well-blended, while the corn soup in Taiwan is recognized for its sweet corn niblets, which add texture to the soup. In Taiwan, corn soup is a famous dish found in breakfast shops, cafeterias, Western restaurants, night markets, and even McDonald's.

Fries in Taiwan are also different. They are not made of potatoes, as the Taiwanese prefer sweet potato fries. They come with Taiwan’s unique plum powder instead of the typical ketchup.

Steaks are popularized and localized in Taiwan. The Western-style porcelain plate is replaced with an iron plate to keep food warm. The Taiwanese steak is also served with fried eggs, rice, or noodles, which is very different from how it is done in the West.

Many Western foods in Taiwan, such as doughnuts and sandwiches, are presented and named differently.

The American fried dough sticks on Taipei Street, for instance, have marinated tomato, braised egg, and cucumber wrapped in an oil-fired pastry. Few would associate this snack with the traditional sandwich. 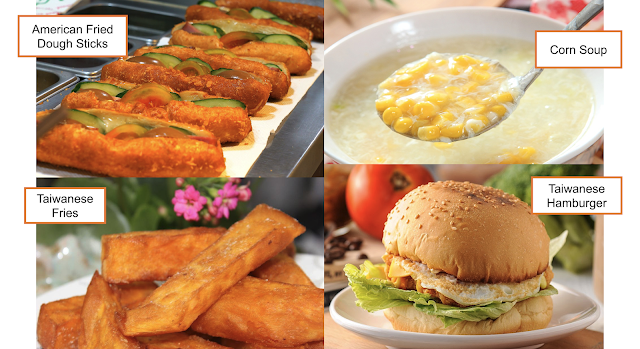 Tianjin's Western cuisine is also worth mentioning. The saying "Shanghai in the south and Tianjin in the north" captures the prosperity of Tianjin in the past. As Tianjin is a city that attracts celebrities from local and abroad, the city has a rich and diverse western cuisine. The famous Kiessling Restaurant is still full of customers, and Suyishi Western Restaurant is just as exquisite as it has always been. Cuisines such as the stewed beef in a casserole and baked assorted meat with cream sauce from Tianjin have now become signature dishes in northern China’s Western restaurants. 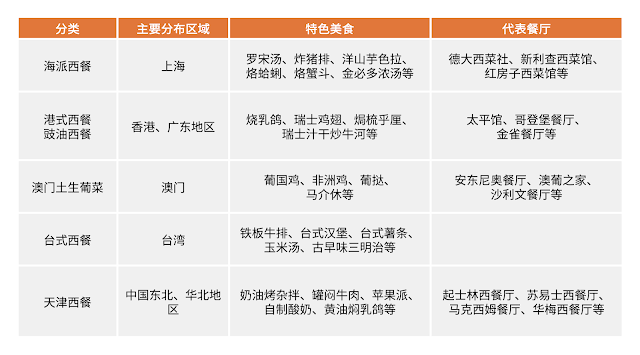 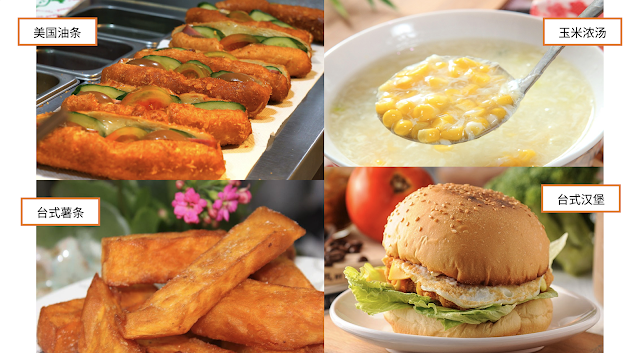